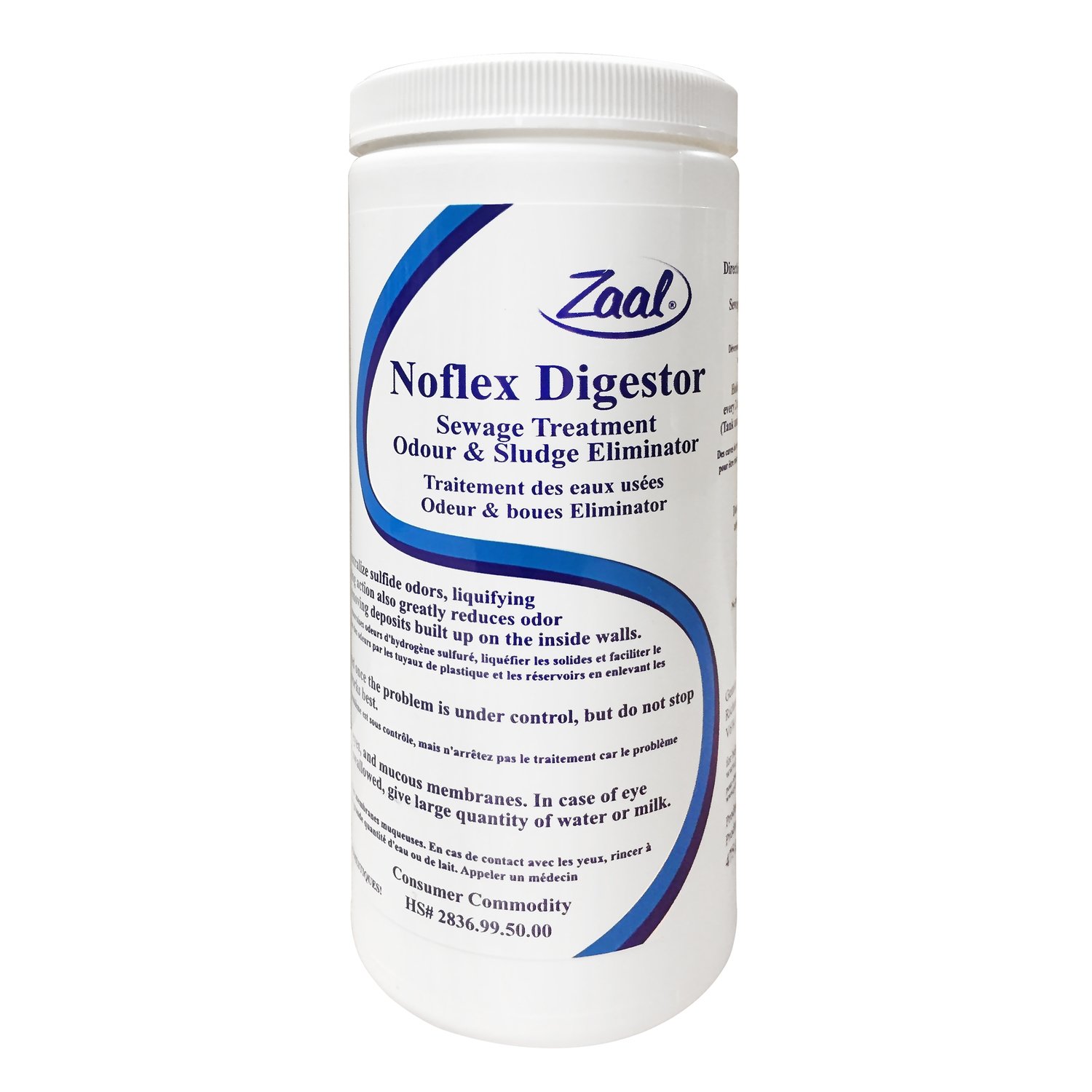 NOFLEX DIGESTOR - ODOR ELIMINATOR - SEWAGE TREATMENT
- Exceptional marine sanitation product for eliminating odors on boats, RVs, campers, and industrial applications. -
NOFLEX Digestor has been used for several years in the commercial industrial work place to reduce sludge build up and control unwanted odor in waste treatment and holding systems on land as well as high efficiency treatment systems aboard marine entities such as the Coast Guard and Merchant Vessels.

Originally developed to enhance the treatment system, NOFLEX is now available in retail packaging for private use in Marine and RV holding tanks and home septic systems. NOFLEX cleans the waste that coats the inside of the piping as it is flushed through the system stopping smells from leaching through pipe connections and hoses. Once inside the holding tank, the product instantly reacts, neutralizing odors instead of masking them.

NOFLEX introduced into the system, being heavier than water sinks to the bottom of the tank where anaerobic, dead bacteria sludge concentrates. Upon contact it reacts with the sludge lifting it into the main stream releasing micro bubbles of oxygen that break up waste. This also releases the proteins out of the sludge that act as an additional source of nutrition for live bacteria. The oxygen and additional protein turn the unit into a super friendly medium for maximum growth capability.

NOFLEX is not a bacterial treatment enzyme biocide or perfumed product but a blend of chemicals that, when introduced into your sanitary system will very quickly neutralize hydrogen sulphides (unwanted odors), clean pipes and liquefy solids in your holding tank. NOFLEX It is safe on plastics, cast iron and copper piping.

As NOFLEX works into the tank it breaks down the organics in the waste water, liquefying solids and greases to facilitate easy pump-outs. The spent residue from the reaction is sodium carbonate (baking soda) which helps buffer the solution for discharge to waste treatment facilities.

Over time holding tank systems can be plagued with build-up of anaerobic sludge in the piping system and tanks, with the resulting unpleasant odors and dangerous fumes, sometimes venting into passenger spaces and dock areas.

NOFLEX DIGESTOR liquefies the sludge and neutralizes odors instantly on contact with waste. This solves smell and solids build up problems, facilitating easy and complete pump out of the unit.

Add ½ an ounce (tablespoon) a day per person.

If there are more than one toilet, do a different one every day.

Add one ounce into empty tank from the toilet, flush twice to introduce the power into tank.

For more than a week add one ounce / 2 tablespoons per 5 gallons of effluent holding capacity.

Tip: before you leave the ship add into the toilet (on shut down) 1/2 ounce of the powder into the water in the bowl. This will keep the water clean and prevent any staining of the bowl; plus give a shot into the unit on start up.

In a severely sludged systems; use the same as above but two times a day, product works better on a routine basis rather than using large doses.

Product can also be used as a drain opener.

In sink or shower drain pour one cap into drain add one cup of cold water and let stand over night. Hair and waste matter will push up out of the drain this should be collected and discarded. Flush with warm water.

Sprinkle over area let sit for 5 minutes and rinse with cold water repeat if necessary.

Using this product on a regular basis will remove sludge inside hoses and stop odor permeation into spaces.

Older hose’s can be washed on the outside to remove any odors or stains.

Add two ounces to a ½ gallon of warm water mix, soak and wipe area with cloth or sponge do not wipe dry or rinse ------leave residue on hoses. Pour left over into toilet.

*Never mix NOFLEX with other chemicals or cleaners outside of the treatment system or holding tank.

Save this product for later